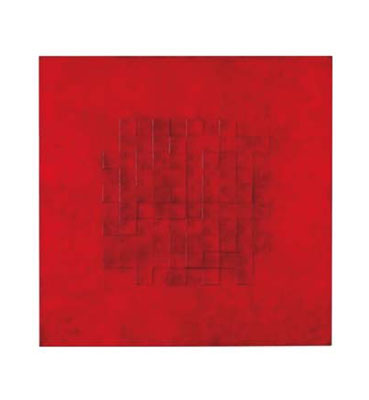 Description: Oil on canvas, 100.3 x 100 cm. Signed, titled, inscribed and dated 'HONEGGER 1960-1961 PARIS ARBRE DE LA PAIX' (on the reverse)
Catalogue note: Gottfried Honegger is an Abstract artist who was influenced by Zurich's concrete art and American painting. He first exhibited in New York in 1960, then settled in Paris where he continued to research on painting and sculpture. Honegger likes involving probability in creating his works with the computers or simply a game of dice. His paintings are arrangements of simple geometric forms inside regular orthogonal frame according to a pre-established program and always based on calculations. These forms are made of cardboard pieces posed sharp edged and marouflaged over a canvas, then covered with many layers of paint, resulting in a relief effect on the surface that catches light and makes the composition changeable. The relief shapes or ‘Bevellings’ are sometimes created by incisions, which he calls "Bevellings". In sculpture, it prevails the study of volumes, consisting of cubes, spheres and their multiples, as well as the establishment of structures and patterns based on systems.
Provenance: Acquired from Christie’s, Sale 15880, Lot 213, Invoice no. DB18016970. Gimpel Fils, London. | Acquired from the above by the present owner, 1963
Catalogue no.: 2018P0079-GH